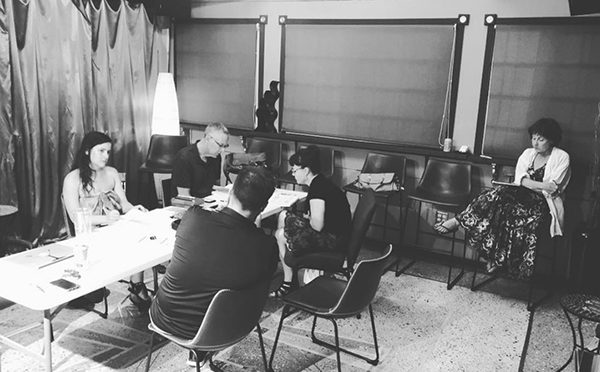 Little Fish Theatre Company (LFT) opened its doors in January of 2002. With all company artists and sweat labor, we successfully turned what used to be an office supply store into a working, operating theatre. Yes, it had a low ceiling, and yes, it had carpet, and a multitude of other challenges that had to be overcome or dealt with. But people came. We offered a year-long line-up of member-driven projects which included
A Coupla White Chicks Sitting Around Talking, Castles in the Air, The Complete Works of William Shakespeare… Abridged, Dark Doin’s at the Crossroads, Lonestar and Laundry & Bourbon, The Illusion, and The Lady’s Not for Burning. 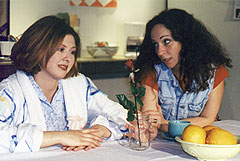 LFT was approached in November of 2002 about moving to another venue around the corner – the old city tow yard. The building had higher ceilings, a cement floor that we could paint and a multitude of its own challenges – but we grabbed the opportunity. Again, with the support of Jerico Development, LFT found another, more permanent home on 8th and Centre St. Built by the love and talents of our slowing growing membership, and with the help of the local Beacon Boys, we turned what used to be a greasy cinderblock building into a theatrical arena. It’s creative, it’s quirky – but it’s FUN!

We held our first official LFT Company Member meeting in July 2003 with the goals of:
1) developing future seasons of company projects that included new, classic, and contemporary works,
2) making a positive impact in our local community, and
3) solidifying the visions and spirit of an ensemble company in which we could all be proud to participate.

LFT is still going strong. We may be Little Fish in a Big Pond, but our continued success in the Downtown San Pedro Arts District speaks to the value we place in our artists, our audiences and our community. LFT is proud to be a professional theatre in the San Pedro Arts District providing year-round theatrical experiences of new, classic and contemporary works.

Find out how to become a Company Member,
visit our Volunteer page.

And don’t forget – we’re still doing Shakespeare by the Sea!

POV – Pick of the Vine 2020
by Ken Levine
“Next weekend I have a short play in the Little Fish Theatre “Pick of the Vine” one act festival in San Pedro, Ca. The play is DATING THROUGH THE DECADES. I’ll be there Saturday night.

Embridge
broadwayworld – Review
“Little Fish company member Kathryn Farren has written and starred in a myriad of short films that have been accepted into numerous film festivals. She is also an accomplished songwriter who has performed in clubs all over Los Angeles…”
— Shari Barrett – broadwayworld